A Look at the Frontrunners for the NHL Awards

The NHL Awards aren’t handed out  until June but with the All-Star Game voting underway it seems like the debate has started for who is going to walk home with what hardware for their mantel. Here’s a look at a few awards and who may be winning them come June.

Hart Trophy: awarded annually to the “player adjudged most valuable to his team” in the National Hockey League.

When you talk about the best players in the NHL two names come to mind, Ovechkin and Crosby, but now there is a new player in the discussion and that guy is Steven Stamkos of the Tampa Bay Lightning. Stamkos has looked amazing early on and he looks like he’s only getting better. There is also talk that Stamkos may flirt with one of the most elite clubs in NHL history, the 50 goals in 50 games club. Only five players in NHL history have accomplished this, Maurice “Rocket” Richard, Mike Bossy, “The Great One” Wayne Gretzky, Mario Lemieux, and Brett Hull. Regardless of whether Stamkos reaches the 50 goals in 50 games plateau he is in perfect position to bring home the Hart Trophy.

If there is anyone that can take the Hart Trophy away from Stamkos it may be his teammate and linemate, Martin St. Louis. St. Louis is most responsible for Stamkos success as he has really helped him to grow. St. Louis is on pace for about 107-108 points, which would be a career high for him. He is one of the most underrated players in the NHL but I don’t think anyone will be able to overlook him this year.

Calder Trophy:  award given “to the player selected as the most proficient in his first year of competition in the National Hockey League.”Winner: Sergei Bobrovsky, Philadelphia Flyers
Games Played: 17
Record: 12-3-1
Goals Against Average: 2.21
Save Percentage: .925%

It’s only November but Bobrovsky is already becoming one of the best goalies in the NHL. The Flyers have spent the last decade looking for a goalie to take them to that next level and early on “Bob” is looking like the guy to do it. Flyers fans were excited to have Michael Leighton back as their starter after a strong playoff run last year that saw them make the Stanley Cup, but an injury has led to Bobrovsky stealing the show and stealing Leighton’s job.

Skinner was surprise draft pick, the Hurricanes took him with the 7th overall pick in the 2010 draft and he has repaid them nicely. Skinner leads all rookies in points and he has really grown into a good player for the Hurricanes. equipped with speed and a good shot it seems like the youngest player in the NHL isn’t showing his age to this point.

Vezina Trophy: awarded annually to the National Hockey League’s goaltender who is “adjudged to be the best at this position”.

Tim Thomas’ career is like a rollercoaster for Bruins fans. In 2008-2009, he was the best goalie in the NHL and he captured the Vezina Trophy for the first time in his career. Last season he lost his job to Tuukka Rask and he just didn’t look like the same goalie as he had a sub- .500 record. Now this season it seems like Thomas is back and he is playing better than ever. Leading the league in goals against average and save percentage and there isn’t a better goalie in the game right now.

I never thought that Carey “Swiss Cheese Glove Hand” Price would be mentioned as a Vezina Trophy nominee at any point of the season. All the comparisons to Patrick Roy were too much for him over the past three years and he has crumbled under the pressure of the Montreal fans. He was under even more pressure this season when the team shipped off Jaroslav Halak, who was the main force behind the Canadiens playoff run, leaving Price as the lone man in net but he has answered the call, for once.

Rangers Look to Rebound Tonight Against the Devils 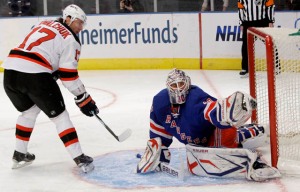 The Rangers are coming off a poor performance last night as they fell to the Philadelphia Flyers 4-1. The Rangers found themselves in penalty trouble and just got beat down by the red-hot Flyers.

Now the Rangers come into Newark to face a familiar foe in the New Jersey Devils. The Devils have had an awful start to the season. After everything they went through to acquire superstar sniper, Ilya Kovalchuk, I’m sure they were expecting better results. They are the worst team in the NHL in scoring and they are third worst in goals against and also boast the fourth worst record in the NHL at 4-9-1. They are also 0-4-1 in their own building this year.

The Rangers are now 6-5-1 and are tied with Pittsburgh for second place in the Atlantic Division. The offense has been strong for the Rangers but the defense on the other hand has been a disaster, especially the penalty kill. They will be looking to get back on the winning track against the struggling Devils

Usually when you talk Rangers-Devils hockey two names are brought up instantly, Henrik Lundqvist and Martin Brodeur. These games are all about these two goaltenders, low scoring affairs with flashy goaltending is the standard for Rangers-Devils hockey. Henrik Lundqvist has been a Devil killer since he came into the league in 05-06. His record currently stands at 19-7-5 with a 1.89 goals against average, the Rangers put their faith in Lundqvist to beat the Devils and he does it time in and time out. Rangers head coach, John Tortorella had this to say about Lundqvist’s success against the Devils, “I’m playing Hank against New Jersey,” said Tortorella at the morning skate Friday. “I don’t care if it’s four games in four nights, Hank’s playing against Jersey.”

Brodeur on the other hand has a record of 42-24-15-5 with a 2.10 goals against average, he has been a thorn in the Rangers side ever since he stepped on to the ice in 1991. Now Brodeur will not be able to play in this game tonight due to a sore elbow so the great goaltending matchup that everyone loves won’t be here. Now the Rangers, as well as their fans, may feel better not having to face Brodeur but there is still one problem…the Devils signed Ranger killer, Johan Hedberg this off-season. Hedberg has a record of 11-4-2 with a 2.12 goals against average, so the Rangers don’t get much of a break here.

The Rangers have had their own mash unit this season. Marian Gaborik, Vinny Prospal, and Chris Drury have all been out for the past few weeks with injuries and Ryan Callahan can now be added to the list. The Rangers top scorer will not dress tonight as he is “too sore” to play, Callahan plays hard and his bound to get banged up but he is a really tough guy so if he can’t play then there is something really bothering him. Alex Frolov, who seems to be suffering from a case of  Chris Higgins syndrome, will most likely take his place on the top line tonight. Frolov has only two goals and five points in 12 games so far this season but being paired with red-hot forwards, Artem Anisimov and Brandon Dubinsky may help him breakthrough.

Rangers may also be without winger Ruslan Fedotenko was elbowed in the head by the wonderful, Daniel Carcillo in last night’s game. He seems to be ready to go but if he can’t then the Rangers will go with 11 forwards and seven defenseman. Todd White will also be back in the lineup tonight as well to help fill in with all the injuries to the Rangers forward corps.

Even with all their injuries the Rangers should still be able to beat the Devils and that’s because of one person, Henrik Lundqvist. When the Rangers need him he delivers and even if the Rangers forwards and defenseman were swapped with a pee-wee hockey team, sometimes they look like they are, the Rangers would still have a chance to win this game. Lundqvist is just that good.